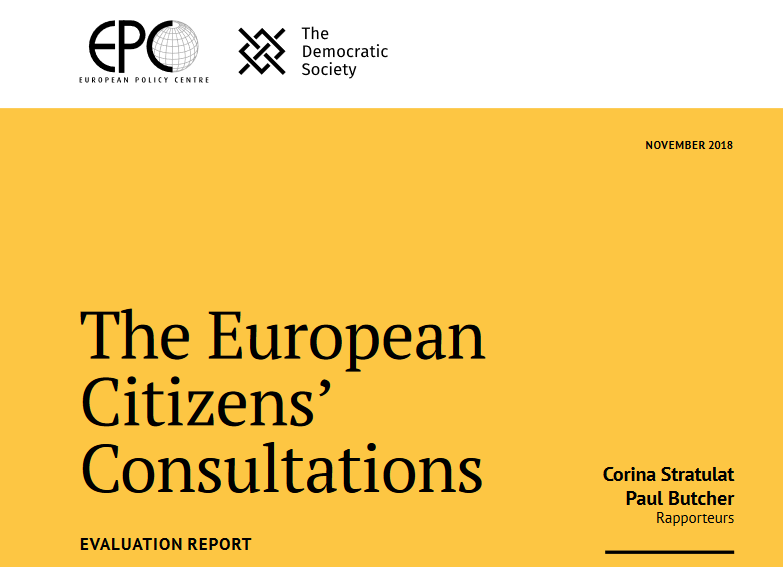 The European Citizens’ Consultations (ECCs) are a new experiment in improving the quality of democracy at the EU level by giving European citizens the possibility to express and exchange their opinions about the Union and its future. To independently monitor and evaluate how the ECCs were organised in practice, the European Citizens’ Consultations Civil Society Network was established with the kind support of the King Baudouin Foundation and the Open Society Foundations. It has been working to build a sustainable network of civil society organisations from across the EU which are involved or interested in the process.

This report presents the results of the research and analysis carried out by the Network over the past seven months, as well as a number of recommendations for how to capitalise on the current round of ECCs and how to improve the way they could be executed in the future.

A key finding of this report is that the member states have stuck to the flexibility principle which they all demanded in exchange for their participation. From the name adopted for the national events, the timeframe for holding these meetings, the chosen organisers, format, agenda, and reporting procedure, down to the rationale for joining the ECCs, each country has done its own thing. This freedom has helped to ensure that all member states felt comfortable enough to join the initiative, but is has also caused some problems. The ECCs’ lack of a common identity has had a negative impact on their visibility, credibility and durability over time, while the failure to produce a coherent message will make it difficult for policymakers to acknowledge and act upon the outcomes.

Looking ahead, any successful new engagement will need more than procedure. There must be a genuine culture of openness in and around the European institutions. It will also require a general shift from seeing similar approaches to large-scale EU democratic reform as single stand-alone projects to understanding them as system interventions that must be built up over time.