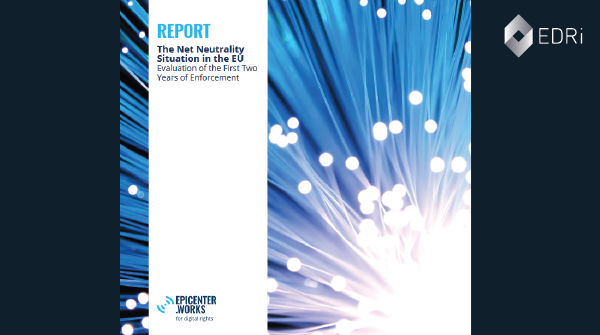 The Net Neutrality Situation in the EU: Evaluation of the First Two Years of Enforcement

Two and a half years after the adoption of the guidelines confirming strong protection for net neutrality in Europe, Austrian EDRi member epicenter.works published a study on the enforcement and status quo of net neutrality. The study entitled “The Net Neutrality Situation in the EU: Evaluation of the First Two Years of Enforcement” examines whether telecom companies are violating net neutrality rules, how regulators are fulfilling their enforcement and supervision duties, and how this affects internet users across the continent.

The study focuses on the most common net neutrality violation in Europe, the practice of “zero-rating”. For this purpose, epicenter.works conducted a complete survey of all zero-rating offers in Europe, including the applications that benefit from the special treatment of having their data excluded from monthly data cap.

The study finds that since Europe’s net neutrality rules came into effect, zero-rating has spread to all but two EU countries with a total of 186 zero-rating offers in Europe. In some countries the price difference between the applications with special prices and the rest of the internet was up to 70-fold. Among the top 20 applications that benefit from zero-rating, only three are from Europe. Applications and services from EU countries are rarely zero-rated, which leads to the conclusion that the European Digital Single Market likely suffers from these net neutrality violations. The data indicates that most application providers only participate in one to three zero-rating offerings, which clearly shows that this system canot scale to a single market with over 200 mobile operators. In effect, the study shows how end-user choices are restricted and Europe’s Digital Single Market has been fragmented by the new market entry barriers that telecom companies have created.

Although regulators should have a coherent approach to the enforcement of net neutrality, wildly different approaches were found. Some of the rulings in Europe are even contradicting each other, for example in the area of port blocking or congestion management. In some countries the fines for telecom companies for net neutrality violations rise to nine-digit sums, and in others only to four-digit sums. In Portugal and Ireland there was no penalty provision to be found at all, while Ireland currently holds the chairmanship of the Body of European Regulators of Electronic Communication (BEREC) in charge of the net neutrality reform.

Another key finding of the study is that despite BEREC guidelines requiring telecom companies to provide at least a minimum level of transparency on internet speeds, companies are not publishing that information, and regulators are turning a blind eye.

The report can be downloaded on epicenter.works’ website, and all of the data sets have been released as open data. The study was supported by Mozilla and the Austrian Chamber of Labour.