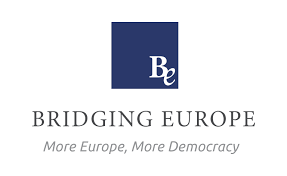 Bridging Europe (BREF) is a non-profit center for studies and research on political issues of the European Union (EU). Founded in January 2014, Athens – based, it has since then carried out research programs and information campaigns for a range of issues, such as 2014 European Elections, EU migration policy, the Greek presidency of the EU, Austerity Policies, the Cyprus issue, while for the near future it prepares programs related to Education, to the Constitutional review of the EU as well as to the Euro – Turkish dialogue between younger generations.At this stage, and with continuous development trends, Bridging Europe’s human resources are composed of 20 researchers, partners and trainees of 10 different nationalities, with average age of 26 years. Working languages: English, French, German, Spanish, Portuguese, Greek, Italian, Bulgarian, Serbian, but also Turkish, Russian, Arabic, Farsi, Azerbaijani.

Bridging Europe’s goals are, among others:

– Strengthening the participation of EU citizens, and most particularly of young ones, in policies and participatory processes,

– Empowering the dialogue among EU citizens on a range of issues of European Politics,

Our financial resources stem from membership fees, donations, and potentially from EU projects or ad hoc assignments by third parties. Every information can be found on our website pages.