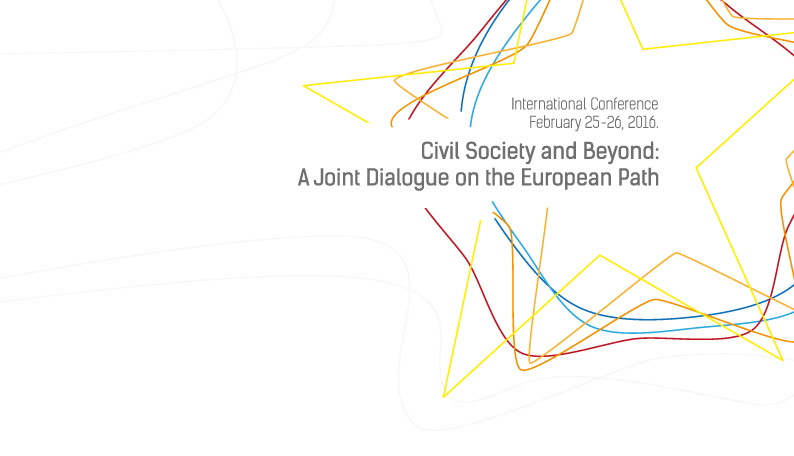 Civil Society and Beyond: A Joint Dialogue on the European Path – What did we learn?

Civil Society and Beyond: A Joint Dialogue on the European Path – What did we learn?

You find the documentation here.

The purpose of the conference was to create an opportunity for stakeholders from different countries from the Western Balkans and Turkey (WBT) to exchange perspectives and experiences with regard to the role of civil society in the European integration, as well as to work on the mechanisms for strengthening bilateral and multilateral cooperation among CSOs in the WBT region and the EU.

The event gathered 155 participants from civil society from the EU, the Western Balkan and Turkey region and Serbia, as well as from European institutions and national authorities from the region, and attracted significant media attention.

Thanks to all members of Citizens For Europe, who participated in this conference by answering our call! With your insights, the network will grow further and others will profit from your experiences.

“During the difficult times we are facing, Europe needs coordination, solidarity and participation. Civil society has proven time and again that it has the know-how and expertise needed to address social priorities, and the Congress “Civil Society and Beyond” has been an important opportunity to engage in constructive multi-stakeholder dialogue between social and political actors active in EU member states, the Western Balkans and Turkey.”

“Having the chance to participate in the Congress was great both for me and my organization. To my mind the two most valuable things I got from these 2 days in Belgrade were the networking with organizations in Europe and especially the Balkan region and the knowledge I gained about the issues that the Balkan states are facing. […] In general it has been an amazing opportunity for me and I hope that this effort will be continued by the organizers.”

“One of the greatest luxuries in attending a kind of event like the Belgrade Congress this February is the chance to meet key actors from the Balkans region, under one roof. […] The Congress had an invisible thread running through it – namely the recent role of the Western Balkans in the migration route for so many refugees over the past year, in intensity. Thanks to Citizens for Europe, this has been a highly educational event which I hope reaps some benefits from the individual parties – one of the main conclusions of the Congress was that all of the actors need to be united in diversity far more than they currently complete.”

“Once again I witnessed that the 3rd sector in the region of the Western Balkans can have a crucial role in the country’s sustainable development and integration in EU structures as long as it is not consumed and absorbed by politics. Only by constantly increasing transparency and reducing influence of political elites over its work, would civil society be able uphold its role as a part of the solution rather than of the problem. […] In the end of the day, informality is an advantage that the 3rd sector cannot afford to miss.”

“As we came to the Congress to share our knowledge and experience with participants from Balkans region, we suggested to implement a House of NGOs (House of CSOs, House of Civil Society) in Brussels for NGOs/CSOs from Balkan states etc., so that CSOs could already use the time now (pre-accession) to learn more from other EU NGOs and also to strengthen their power and in a sense ‘independence’ towards other actors in their own countries. I believe that this idea was put on the map and hope it will be continued by egg. TASCO Serbia.”

“As a student in journalism, covering a major european conference like this one in Belgrade, was a very interesting experience, as much in terms of contents and details than meetings. Regarding this year congress’ topic, I now understand how fundamental and primordial the development of the civil society in the Balkans countries is. […] It’s effectively always stimulating to have access to a variety of different points of view. Obviously, the very ideas behind the european project can vary greatly from people living in Balkans to those living in the « old european » countries.

“This experience I attended mostly as an observer gave me some answers about questions I had never really asked myself, mainly regarding the civil society and its importance and impact on European integration and enlargement talks. I came back with new mindsets to deal with the issue but also with a strongly raised interest in the topic.”

“The most important in my point of view was the networking among the participants, which was enhanced by the various additional activities, such as the “Social Event”. We left Belgrade with many, thoughts, many ideas, for potential activities about Civil Society, regional cooperation, social activity etc. on the way to a more united social Europe.”