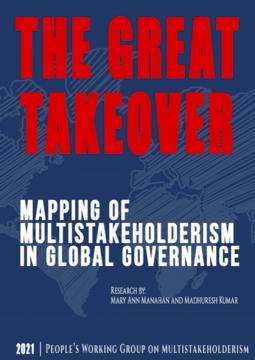 [Book] The Great Takeover: Mapping of Multistakeholderism in Global Governance

Submitted by The Transnational Institute (TNI)

This book The Great Takeover: Mapping of Multistakeholderism in Global Governance represents an important moment on the road to exposing this trend, raised on the international agenda by a group of social movements, networks and organizations who started to walk the journey together a few years ago. The journey has resulted in a deeper analysis of how corporate capture is achieving dominance in world affairs.

From health, to food and agriculture, from education to internet, from environment to public services and human rights, the research shows that decisions made in these Multistakeholderism mechanisms as well as in captured multilateral institutions, have direct impact on on people’s health, children’s education, digital rights, access to basic public services and human rights in the territories, including the right to a healthy environment.

By dislocating the locus of key policy decisions from the multilateral system into mixed mechanisms where the private sector rules–with the support of some states, international institutions, and big philanthropists–the phenomenon of “multistakeholderization” of the global governance has become systemic.

This trend has emerged in the nexus of relationships between the World Economic Forum (WEF), the Davos Class and the United Nations (UN) – more noticeably since the establishment of the Global Compact (2000) – a non-binding agreement giving Corporations access to the UN. There have been several critiques and ‘push-backs’ raised by social movements and affected sectors on this dislocation of the multilateral institutions – including in 20218, otn the Strategic Partnership signed between the WEF and the UN.

The book was built in a dialogical way between Mary Ann Manahan and Madhuresh Kumar – the researchers – and the members of the People ́s Working Group on Multistakeholderism* who in working together have adopted this name before launching this common contribution to the analysis and awareness raising on the issue. This dialogue implies that the mapping is alive, and reveals both the static structures but also the political dynamics driving the various scenarios played out in the different sectors. The resulting data is also available and accessible in the Annex.

From the impacts on the lives of peoples as documented in this publication, it is clear that instead of being a solution, multistakeholder mechanisms accelerate the route towards a more undemocratic, unsustainable and unequal world.

The journey in this volume presents demanding challenges and invites active participation to join in this effort to unveil the Takeover of our common future by the actors of global corporate power. It is urgent to mobilize in building a stronger democratic multilateral system accountable to the public interest and committed to a sustainable planet.