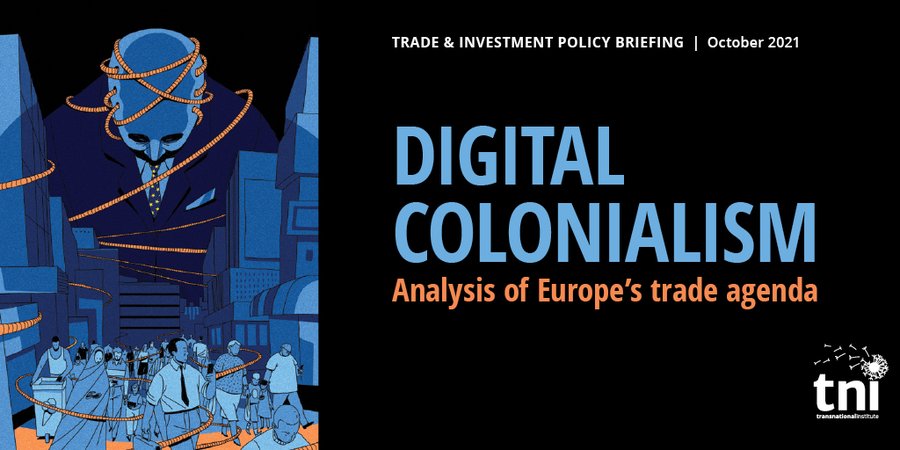 Submitted by The Transnational Institute (TNI)

The global battle for control of the digital economy is typically portrayed as one fought by only two titans: US and China, but that does not mean that the EU has been standing still. As this briefing documents, the EU has been making strong efforts to catch up using trade negotiations and trade rules to assert its own interests. In the process, the EU is trying to climb up on the backs of the developing countries, undermining the chance for all to equitably share in the benefits of technological development.

This briefing examines 14 clauses on digital trade that the EU advocates for in its trade negotiations and their impacts on developing countries. Based on exhaustive analysis of 13 different EU free trade agreements as well as their positioning in the World Trade Organization, it shows that the EU has adopted a colonialist strategy, going out to hunt for data from the global South, in order to position its own companies in the new global cybernetic value chains. To empower its own Big Tech, the EU is seeking to force through clauses in trade negotiations that will hinder digital industrialisation, restrict necessary state oversight of corporations and undermine citizens’ rights elsewhere, in particular in developing countries. While these clauses are technical in nature and obtuse to the general public, they can affect everything including peoples’ rights to privacy, the nature and functioning of public services, the possibility of economic development and industrialisation, the accountability of government, even the quality of democracy itself.