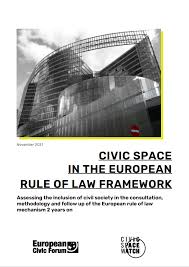 [Report] Civic Space in the European Rule of Law Framework

Assessing the inclusion of civil society in the consultation, methodology and follow up of the European rule of law mechanism 2 years on.

On a cultural level, civil society actively promotes and strengthens the rule of law by sharing information, promoting civic education, raising awareness, and understanding of the rule of law, and countering discrimination and disinformation. It fosters a culture of active participation in public and community life. Civil society also plays an instrumental part in the implementation and functioning of the rule of law: civil society actors support access to justice and human rights, monitor legality and proportionality of laws, measures, and practices, and support the work of independent authorities and human rights bodies.

Over the last years, civil society and social movements, academics, and other public watchdogs, including national human rights institutions, have alerted and made more visible a fast deterioration of the rule of law and democratic backsliding in some European Union Member States. These groups have often been at the forefront of advocating, mobilising, and acting in defence of these democratic frameworks. In doing so, they have become the target of restrictive laws, orchestrated media disinformation or delegitimizing campaigns, judicial and administrative harassment, physical and verbal attacks, while their economic resources and ability to engage with policymakers were shrunk.

Pressure on civic actors is widely recognised as one of the first indications of deterioration of rule of law and democratic backsliding which is rightly expressed in the general communication of the 2021 rule of law report by the European Commission. The COVID-19 pandemic contributed to accelerate these trends in several countries at a time when civic actors’ role was most needed to face the health, socio-economic and democratic crisis unfolding.