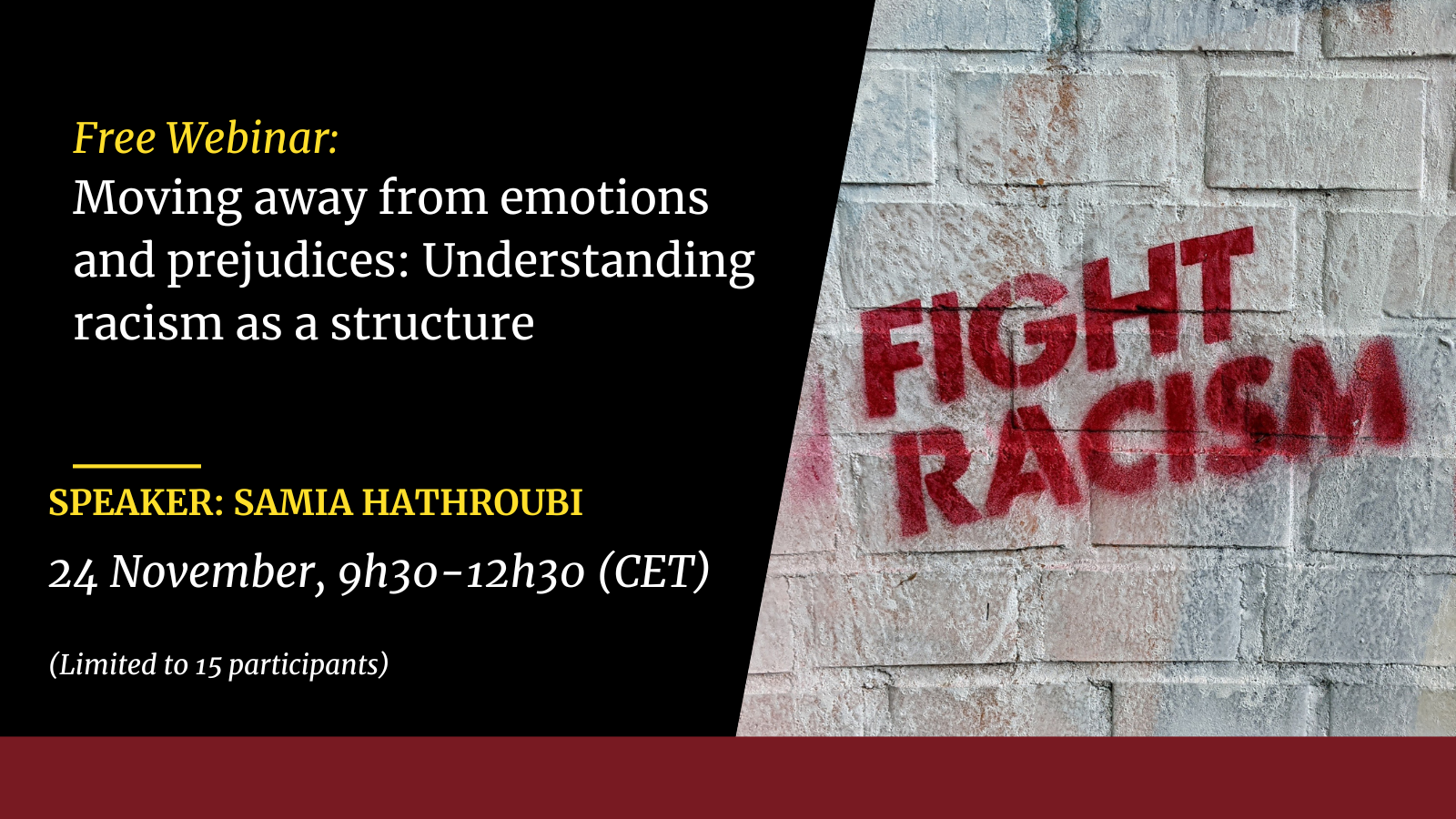 Moving away from emotions and prejudices: Understanding racism as a structure

Moving away from emotions and prejudices: Understanding racism as a structure

Often, too often, when we talk about racism we tend to think of it as a personal problem, a problem of personal prejudices, or personal acts for example against Roma people, Black People or People of Color or seen as such.

Our webinar aims at reflecting critically on these first hand assumptions and look at racism as a systemic problem that impacts every aspect of people’s lives.
It also aims at highlighting how much work we have to do to understand the ways racism structures our world, and the part we have to play to dismantle it.

During this webinar, we will address the notions of privilege and white privilege in our Western societies.
We will also hear about Equinox’s European initiative «Why Brussels is so white ?» which tries to tackle Brussels’ whiteness.
Finally we will discuss and share tools and recommendations to move forward as a person and in your organizations to become more aware about dismantling oppressive and racist systems : What can we do to be more inclusive (indivudally, in our organisations, in society) ? What are the solutions (new solutions, failed experiments…) ?

Registrations are open to Citizens for Europe members until the 18th of November via this link : REGISTRATIONS

NB : To allow participation in a safe space, the webinar will be limited to 15 people

About the trainer : Samia Hathroubi, lecturer, trainer and scholar.

As a Doctoral student at the Max Weber Sociology Institute at the University of Heidelberg in Germany, Samia has focused her research on race, ethnicity and religious groups in Paris and Berlin.
Previously to joining academia, Samia Hathroubi began her professional career at the age of 21 as a teacher in an impoverished high school in the Parisian suburbs, while volunteering in Parisian associations and fight against the policies and discourses of exclusion towards immigrants and those perceived as foreigners in the public debate.
Keeping the memory of her Tunisian parents’ migration past anchored in her mind, she quickly became involved in the fight for democracy and dignity during the Arab Spring.
Alternately director of advocacy in an association of young activists in the Middle East, she lived between Jerusalem, Ramallah and Tel Aviv. This experience coupled with her biographical history allowed her to look at and understand the Jewish-Muslim relationship through time and led her to commit herself as director of interreligious programs within the Foundation for Ethnic Understanding in Europe and within Coexister in France.
Because fraternity is vain without social justice and equity, Samia, whose parents and grandparents never had the chance to go to school, has been involved as a role model, coach and mentor for 9 years within the association Rev’Elles in France, which opens the field of possibilities to young girls from modest backgrounds by helping them in their professional orientation.
She has written several articles on the Muslim presence in France and on interfaith relations and gave trainings and lectures all across Europe and North America.