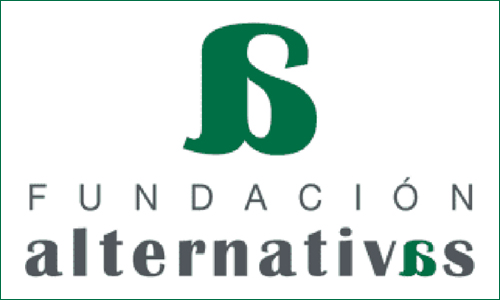 The FOUNDATION was established in 1997 as a channel for political, social economic and cultural reflection in Spain and Europe in the context of growing globalization.

It is a meeting-place, a place for the discussion and devising of ideas and proposals with the participation of the most dynamic and advanced actors in our society.

The main goal of the promoters of this project is the analysis and definition of new ideas, aimed at engaging citizens and society as a whole. It is about giving the floor to those who from all walks of life have something to say.

The analysis of the issues which most concern citizens, their discussion and to act as a bridge between different opinions form part of the purposes of FUNDACIÓN ALTERNATIVAS.

Fundación Alternativas will cover a wide range of projects, including the organisation of events for debate and public dissemination of ideas (i.e. conferences, debates and public engagements, policy forums, surveys, calls for papers, seminars and workshops) and the publication of a variety of documents (books, studies, working papers, communication views, annual reports), all documents are available on the Foundation’s web site (www.fundacionalternativas.org).

The foundation funds its activities through sponsorship from individuals and private companies. In recent years, income from public grants, originating overall from Spanish governmental bodies and the European Union, has increased and ensures greater guarantees for the future