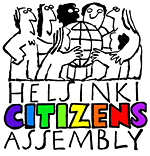 Helsinki Citizens’ Assembly (HCA) has been founded 1990 in Prague by civic activists from Eastern and Western Europe, with the active support of President Vaclav Havel.
It is a non profit civic movement, based on the involvement of individual activists from NGOs and social movements.
Its main focuses are democracy, peace and empowerment of civil society. The international HCA network had developed branches all over Europe from Scotland to Azerbaijan. In 2000, HCA became a decentralised and polycentric network.

– To introduce the basic rights and freedoms accepted in international agreements ;
– To promote peaceful processes for the resolution of conflicts, using dialogue and looking for mutual understanding;
– To improve pluralist democratic bodies and civil society initiatives;
– To ensure the supremacy of law and to defend an economic system that promotes the well-being of human life and the environment.

– Old and historic initiative
– Special links with Balkans and Caucasus, and with Turkey
– Decentralised and polycentric organisation