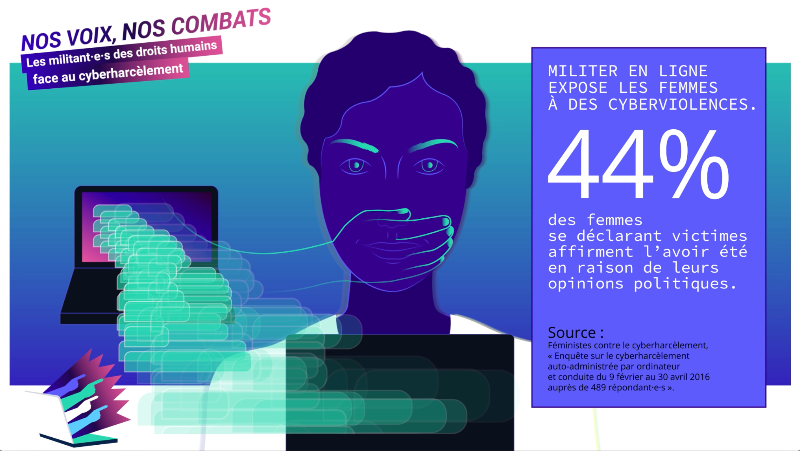 Our voices, our fights

Our voices, our fights

Cyberviolence is frequently used to target minority and discriminated groups, and to discredit their representatives in order to dissuade them from speaking out.

The Internet and digital technologies are not neutral : Digital platforms and social networks are designed and developed by individuals belonging to a privileged social category. Often, these are white, able-bodied, cisgender, highly educated men who face little or no discrimination related to racism, sexism, disability, gender identity or sexual orientation.

Yet, digital spaces where cyberviolence takes place are political spaces built in their image, within which freedom of expression -when it exists- remains above all that of dominant social groups.

With the emergence of forums, blogs, social networks, etc. and the massive digital activity of far-right activists, cyberbullying has unfortunately established itself as a mode of political action.

In a context when social media is an integral part of activism spaces, cyberbullying is also impacting those who defend human rights and online violences are used as a tool to intimidate and silence activists : they generate mental health risks for these persons and are a collective danger as they restrict spaces of expression and impoverish the public debate.

As part of the #AssoTech project Citizens for Europe co-initiated 3 years ago with VoxPublic, #OurVoicesOurFights is a campaign we co-created with VoxPublic and Féministes contre le cyberharcèlement (Feminists against cyberbullying), to show that it is possible to fight these violences collectively and  to share useful tools for activists willing to keep on fighting for their causes despite cyberbullying.

As part of the  « Our voices, our fights » campaign, a self-defense guide against cyberbullying addressed to human rights activists has been published, together with three testimonial videos from activists who suffered from cyberbullying and share their tips and resources on how to deal with such attacks, better respond to them and protect oneself.

A press conference and launch event was organised on the 5th of October at La Cité Audacieuse in Paris, to present the self-defense guide and debate the impact of cyberbullying on human rights activists’ action, on democracy and freedom of expression.