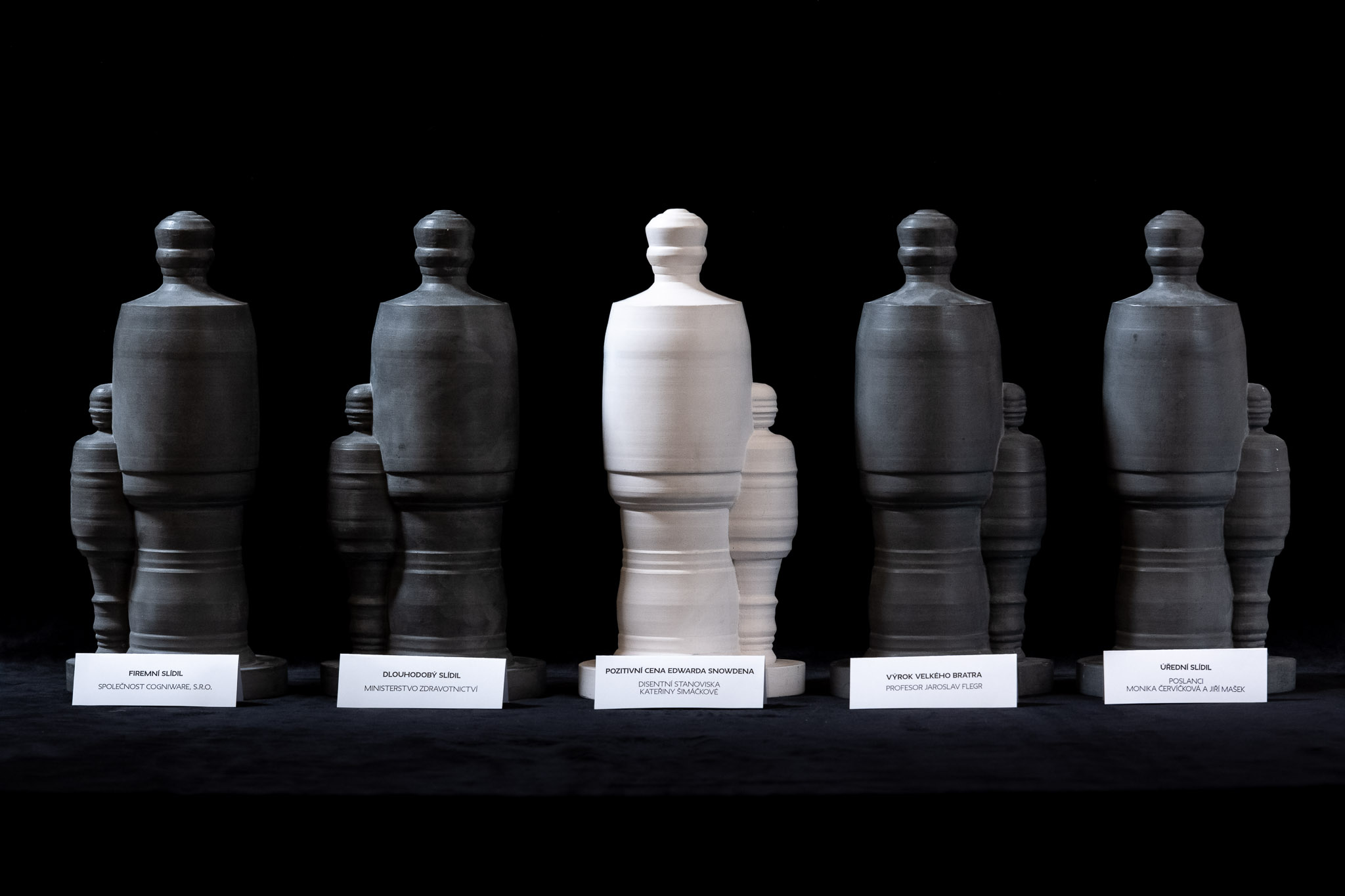 Company supplying tracking systems or a proposal to cancel anonymous SIM cards: Big Brother Awards for 2020 were awarded in the Czech Republic

IuRe has awarded prizes to the most intrusive authorities, companies and technologies for the sixteenth time in a row. This year’s awards were closely related to the pandemic. Many ideas emerged as a part of the fight against COVID-19, limiting privacy in order to limit the spread of the virus.

A nine-member jury of technology experts, lawyers, human rights defenders and journalists awarded anti-prizes in four categories. The first prize, entitled Long-Term Snooper, was won by the Ministry of Health for a series of mistakes in handling personal data during the epidemic. The jury emphasized problems in the legislative work, especially with regard to the proposal that hygienists should be granted access to location data from operators, as well as to the apparently illegal transfer of data on people in quarantine to the Czech Police by the Hygiene, which was ordered by the Ministry. Last but not least, the Ministry also received the award for problems with data leaks from registration forms for testing and later vaccinations to advertising giants, which were caused by the incorporation of tracking elements of these companies in web registration forms.

Deputies Monika Červíčková and Jiří Mašek (both of ANO movement) won the award for the Official Snooper for their proposal to introduce mandatory registration of birth numbers of people buying anonymous SIM cards. The amendment they have submitted would oblige prepaid SIM card sellers to obtain data from their buyers; birth numbers of Czech citizens and, in case of foreigners, name, surname, date and place of birth. They would be obliged to pass this data to operators, who would then pass it on to the police and intelligence services on request.

The Snooper Company award was won by the Czech Company Cogniware, which is developing the Cogniware Insights system, which includes a number of modules for evaluating evidence using artificial intelligence methods, that is using voice recognition and using biometrics to recognize people by face or age or emotion. “The development of such a tracking system, which potentialy affects privacy significantly, is not such a problem on its own as is the company’s approach to those who get this weapon, as the company’s representatives themselves call it, in their hands,” said Jan Vobořil.

According to Cogniware, the system in development is used, for example, by intelligence services and the police in the United Arab Emirates, in Saudi Arabia, Jordan or Bahrain; that is in states which are all considered authoritarian regimes according to the Democracy Index. In one of the publicly available interviews, the owner of the company, Ján Račko, stated: “These states have looser rules regarding the protection of personal data, so they use the capabilities of the system for routine tasks.” The company has no control over how and for what purposes its product is being used. As Martin Černý, who is in charge of business relations, stated in the media: “Actually, we don’t even know what our clients use the software for.” The system, described as a weapon by the company’s owner, can be used in any way, including the suppressing of human rights.

In the next category, Big Brother’s Statement 2020, the prize was awarded to Professor Jaroslav Flegr. He suggested in autumn that privacy protection should be temporarily limited, specifically that state authorities should be allowed to use non-anonymized personal location data from mobile phones and banking transactions.

“We appreciate Professor Flegr’s attempts to raise awareness of the pandemic and to fight against it, yet the introduction of monitoring tools Flegr is talking about would not only be a step we consider very invasive in terms of privacy, but also an ineffective one in democratic European countries, which is an important argument for its unacceptability. Experience from Asian countries with their significantly different culture of privacy protection and higher willingness of their citizens to accept invasions of privacy is not transferable,” said Vobořil.

The winners of the positive Edward Snowden Award for privacy protection in 2020 are the two dissenting opinions of Constitutional Judge Kateřina Šimáčková on important plenary findings of the Constitutional Court in the matter of privacy protection. In one of them, Kateřina Šimáčková was the only one to express a different opinion against the ruling of the Constitutional Court, which considered a proposal to repeal Czech legislation concerning the widespread collection of metadata on electronic communications.

“Dr. Šimáčková decided not to accept the award, considering that it would be an award for decision-makingactivities of a judge and regarding the need to preserve judicial independence, which of course we fully understand and respect. Therefore, after an agreement, we added her statement, which explains this step, to the justification,“ added Jan Vobořil.