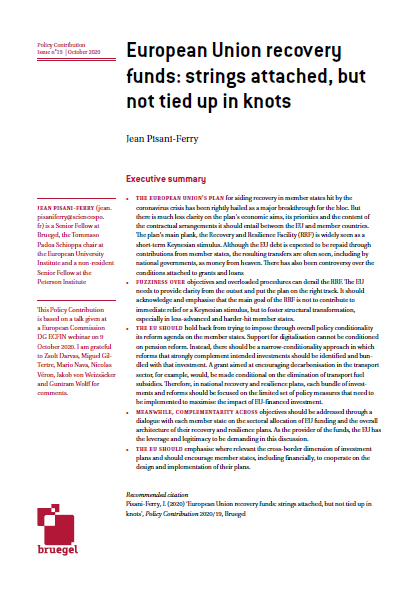 European Union recovery funds: strings attached, but not tied up in knots

Ensuring effective recovery spending is a high-stakes challenge for the European Union, with the potential for derailment because of fuzzy objectives and overloaded procedures. The EU should work with member countries to identify limited policies that will maximise the impact of EU investment, while accounting for spillovers.

The European Union’s plan for aiding recovery in member states hit by the coronavirus crisis has been rightly hailed as a major breakthrough for the bloc. But there is much less clarity on the plan’s economic aims, its priorities and the content of the contractual arrangements it should entail between the EU and member countries. The plan’s main plank, the Recovery and Resilience Facility (RRF) is widely seen as a short-term Keynesian stimulus. The EU debt is expected to be repaid through contributions from member states, but this has not stopped the resulting transfers as being seen, including by national governments, as money from heaven. There has also been controversy over the conditions attached to grants and loans.

Such fuzziness over objectives and overloaded procedures can derail the RRF. The EU needs to make an effort to provide clarity from the outset and put the plan on the right track. It should acknowledge and emphasise that the main goal of the RRF is not to contribute to immediate relief or a Keynesian stimulus, but to foster structural transformation, especially in less-advanced and harder-hit member states.

The EU should hold back from trying to impose through overall policy conditionality its reform agenda on the member states. Instead, there should be a narrow-conditionality approach in which reforms that strongly complement intended investments should be identified and bundled with that investment. A grant aimed at encouraging decarbonisation in the transport sector, for example, would, be made conditional on the elimination of transport fuel subsidies. Therefore, in national recovery and resilience plans, each bundle of investments and reforms should be focused on the limited set of policy measures that need to be implemented to maximise the impact of EU-financed investment.

Meanwhile, complementarity across objectives should be addressed through a dialogue with each member state on the sectoral allocation of EU funding and the overall architecture of their recovery and resilience plans. And the EU should emphasise when relevant the cross-border dimension of investment plans and find ways to encourage member states to cooperate on the design and the implementation of their plans.