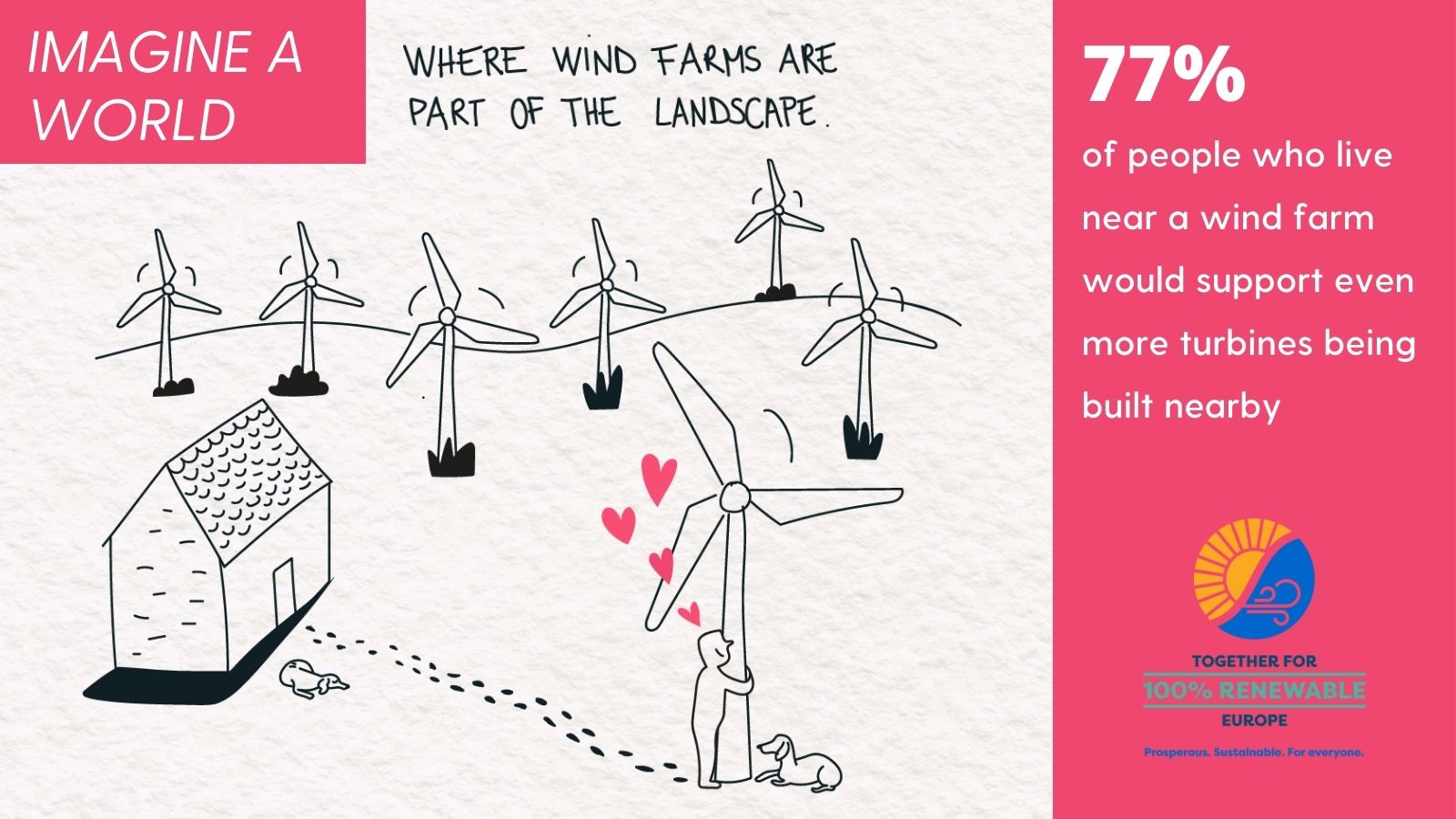 NGOs call ahead of COP26: Unprecedented solar and wind energy surge is needed to stabilise climate

Submitted by CAN Europe

Europe needs an unparalleled rollout of wind and solar energy to avoid worsening climate breakdown, according to a call to action launched today by Climate Action Network (CAN) Europe with 185 member organisations across Europe, representing over 40 million European citizens. The coalition demands a faster, fair, and sustainable energy transition to a 100% renewable energy by 2040. Renewable electricity, mainly from solar and wind, is key for this transition. It is essential that all our electricity comes from renewable energy sources already by 2035.

Europe has experienced a summer of extreme fires and floods, caused by climate change. The scientific community warned in August that time was running out to tackle the threat. The landmark report by the Intergovernmental Panel on Climate Change (IPCC) showed world leaders that the future looks dire, but it also showed that we still have the opportunity to halt the climate emergency if we act immediately and cut emissions drastically within this decade. Those leaders meet in November at the UN Climate Change Conference COP26 in Glasgow to advance international climate negotiations.

The Statement urges European governments to enable a rapid and fair transition away from fossil fuels towards 100% renewables covering all sectors such as buildings, industry and transport by 2040 paired with measures to significantly reduce energy demand. Renewable electricity, mainly from solar and wind, must be the “backbone” of our energy system, driving decarbonisation across all other sectors. Additionally, CAN Europe members and allies from Central and Eastern European countries have sent an open letter to their governments with the specific recommendations for the region.

CAN Europe’s statement comes as EU leaders will be meeting tomorrow at the European Council in Brussels (21-22 October) to discuss the soaring energy prices and measures to tackle the crisis spreading across Europe.

“The current fossil gas crisis fuelling energy bills is another stark reminder of the urgent need to shift away from fossil fuels to a fully renewables-based energy system. The truth is that we simply cannot afford the environmental, economic and social costs of fossil fuels. EU leaders should avoid short-term quick fixes but instead ramp up efforts to accelerate the rollout of solar and wind energy, while increasing efforts to reduce energy consumption” – says Wendel Trio, Director of Climate Action Network Europe. “We can and must achieve a 100% renewable energy system by 2040 and address at the same time environmental and social goals. A fully and solely renewable power generation by 2035 should be a major checkpoint on this pathway. Europe has a largely untapped domestic renewable energy potential which combined with overwhelming support from citizens for solar and wind energy development provides an unmissable opportunity.”

YouGov polling of public attitudes to wind and solar power in ten European countries, published today, shows strong support (86%) for the measures needed to deliver the surge in renewable energy that CAN Europe is calling for, as well as for the direct involvement of people with solar and wind energy generation. 84% of people interviewed support more solar in their neighbourhood, while 70% support wind turbines being built in close proximity to where they live. Support for onshore wind farms increases even further to 76% when communities are engaged through the creation of local jobs, shared profits and ownership, and planning and nature protection consultations. The support for wind and solar projects is even higher among people who already live near one in every single country. Across Europe 77% of people who live near a wind farm would support more turbines being built near to them, with 84% of those living near a solar park welcoming more panels. Support for wind and solar climbs sharply when people co-own the projects and there are local benefits (lower bills (81%) or local jobs (72%)). Strong majorities believe their government should help fund rooftop solar (81%) and ensure that all new buildings have rooftop solar (68%). Three quarters (76%) of adults in the ten countries are concerned about the impacts of climate change, while only 18% think their government is doing the most it can to tackle the threat.

“Under this call to action “Together for 100% Renewable Europe: Prosperous. Sustainable. For everyone”, we will work towards scaling up the deployment of solar and wind energy which benefits people and supports protection and restoration of nature” – says Seda Orhan, Renewable Energy Campaign Coordinator at Climate Action Network Europe. “This is the decade to make it happen. Along with governments, we also need local authorities and municipalities, investors and businesses to harvest the benefits of 100% renewable energy”.