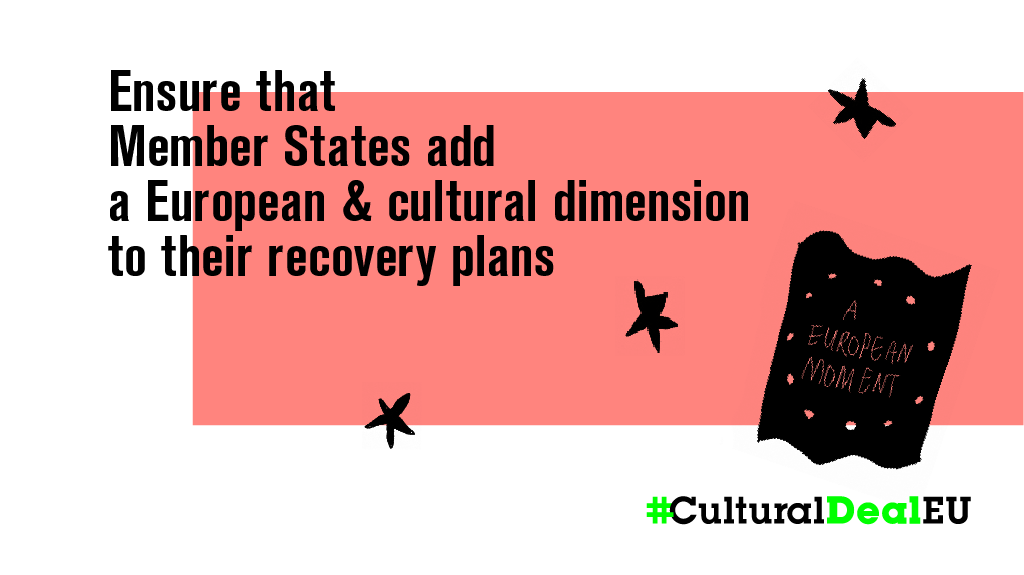 [Open Letter] Secure a future for cultural life in Europe

Following the open letter published by 110+ pan-European networks on 30 October 2020 “Make culture central in the EU recovery”, the group comes together again to reiterate their call to the national governments and the European Commission. In the second open letter published today by the group, coordinated by Culture Action Europe, the European cultural community call on the Member States and the European Commission to secure a future for culture and cultural life in Europe.

Culture must be included in each and every National Recovery and Resilience Plan (NRRP) that EU countries should present to the European Commission before the 30 April deadline. The representatives of the European cultural ecosystem urge governments to dedicate at least 2% of the Recovery Fund to culture and put culture as a priority sector when using funds from Next Generation EU. In addition, 110+ cultural networks call on the Member States to engage with the representatives of their cultural communities and civil society organisations in the design and implementation of the NRRPs. “Long-term structural support to rebuild the European cultural ecosystem needs to be co-developed, involving all relevant stakeholders, both public and private”, – reads the letter.

Tere Badia, Secretary General of Culture Action Europe said: “It is crucial that culture is made central in national recovery plans, with a dedicated budget to reactivate the sector. Now is the time for implementing effective measures to avoid a post-pandemic desert in the cultural ecosystem and mainstream culture as a priority dimension in the EU policy thinking and funds-allocation.”

Ensuring that culture is explicitly included in the NRRPs will help secure both the future of the sector and its important contribution to Europe’s future. Reinvigorating the cultural ecosystem not only offers hope to millions of workers who saw their jobs endangered by the pandemic, it can also create new meaning and purpose to all Europeans and the European project.

Read the letter in full