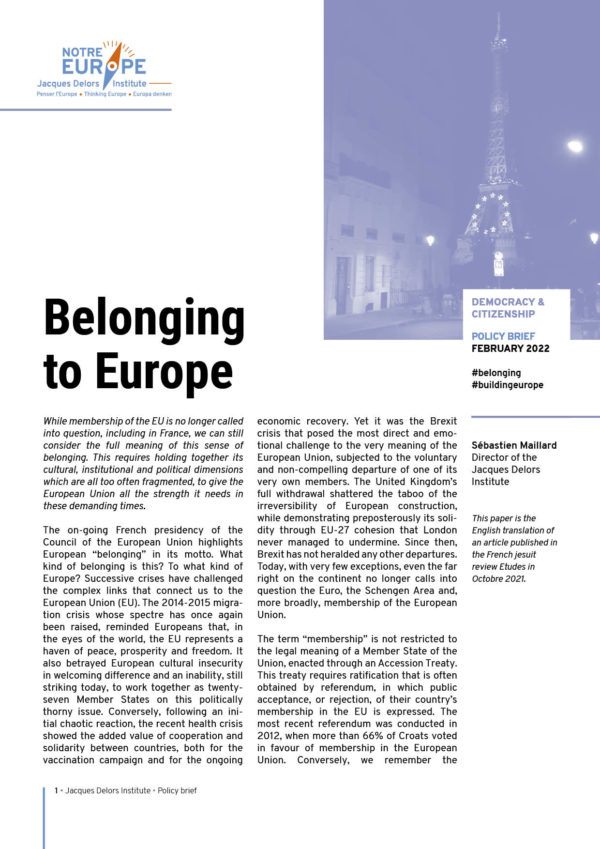 While membership of the EU is no longer called into question, including in France, we can still consider the full meaning of this sense of belonging. This requires holding together its cultural, institutional and political dimensions which are all too often fragmented, to give the European Union all the strength it needs in these demanding times.

The on-going French presidency of the Council of the European Union highlights European “belonging” in its motto. What kind of belonging is this? To what kind of Europe? Successive crises have challenged the complex links that connect us to the European Union (EU). The 2014-2015 migration crisis whose spectre has once again been raised, reminded Europeans that, in the eyes of the world, the EU represents a haven of peace, prosperity and freedom. It also betrayed European cultural insecurity in welcoming difference and an inability, still striking today, to work together as twenty-seven Member States on this politically thorny issue. Conversely, following an initial chaotic reaction, the recent health crisis showed the added value of cooperation and solidarity between countries, both for the vaccination campaign and for the ongoing economic recovery. Yet it was the Brexit crisis that posed the most direct and emotional challenge to the very meaning of the European Union, subjected to the voluntary and non-compelling departure of one of its very own members. The United Kingdom’s full withdrawal shattered the taboo of the irreversibility of European construction, while demonstrating preposterously its solidity through EU-27 cohesion that London never managed to undermine. Since then, Brexit has not heralded any other departures. Today, with very few exceptions, even the far right on the continent no longer calls into question the Euro, the Schengen Area and, more broadly, membership of the European Union.

The term “membership” is not restricted to the legal meaning of a Member State of the Union, enacted through an Accession Treaty. This treaty requires ratification that is often obtained by referendum, in which public acceptance, or rejection, of their country’s membership in the EU is expressed. The most recent referendum was conducted in 2012, when more than 66% of Croats voted in favour of membership in the European Union. Conversely, we remember the rejection by the people of Norway in 1972, repeated in another referendum in 1994. The most spectacular remains Brexit, pushed forward by a slim majority of British voters in 2016, putting an end to a membership which had been confirmed forty years earlier by the first referendum in the country’s history, in 1975, which experienceda higher turnout and where more than 67% voted in favour.

Belonging to Europe is never as clear-cut and binary as a referendum implies, however. It goes beyond the simple yet fundamental question of membership in the EU. Belonging is both individual and collective and, under all circumstances, subject to change. It draws, to varying degrees, from feelings, reason and conscience. Feelings govern the emotional attachment, reason assesses the benefits, while conscience brings together feelings and reason to grow a deep conviction.

This threefold approach to belonging meets a triple definition of Europe. The same word can refer to the continent and its civilisation, to the European Union as it functions today, and to a grand design, the plan for a united Europe, or in other words “making Europe”. Europe is addressed in different ways depending on its cultural, institutional and irenic aspects. To call oneself “European” may mean a cultural affiliation, acting, working, studying and consuming as an EU citizen or aspiring to the plan for a united Europe as a “committed” European.