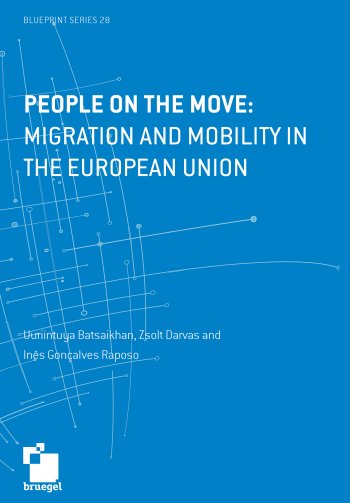 People on the move: migration and mobility in the European Union

Migration is one of the most divisive policy topics in today’s Europe. In this publication, the authors assess the immigration challenge that the EU faces, analyse public perceptions, map migration patterns in the EU and review the literature on the economic impact of immigration to reflect on immigration policies and the role of private institutions in fostering integration.

Immigration tops the list of challenges of greatest concern to European Union citizens. While in the past immigration was primarily driven by economic motives and family reunification, in the last few years Europe has experienced a surge of asylum seekers, in particular from war-torn countries. In addition, some EU countries have seen significant inflows of EU citizens taking advantage of their freedom of movement rights.

Such movements of people pose major challenges for policymakers. EU countries must integrate immigrants while managing often distorted public perceptions of immigration. To meet the challenges, a better evidence base is needed that accurately describes the scale of the challenge, the impacts of immigration on European labour markets and public finances, the successes and failures of EU countries in integrating immigrants, and the hurdles refugees face, such as financial inclusion. This Blueprint offers an in-depth study that contributes to the evidence base and sets out twelve policy recommendations related to public dialogue, refugees, integration of immigrants and labour shortages.